In Russia, skating is as popular as football 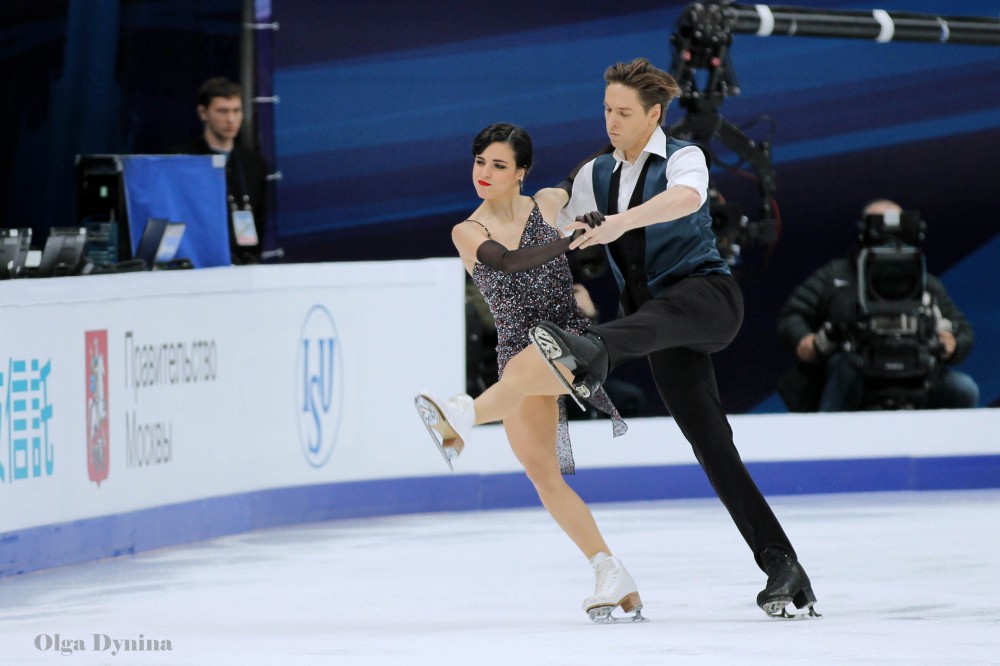 Sara Hurtado (Madrid 1992) is a professional figure skater who competes in the Ice Dance discipline. The 6-time Spanish champion came twelfth in the last Olympic Games and has recently obtained a silver medal in the World Series with her partner Kirill Khaliavin. She started practicing the sport by chance and now resides in Moscow; the cradle of ice skating. During the week she trains without rest. On weekends she wanders around the great parks of the magnetic city.

What does the silver medal achieved in the World Series mean to you and to your partner Kirill Khaliavin?

After the last Olympic season, we started working more solidly and with more confidence in both our team and our potential. I believe we can be top ice skaters of this discipline at a worldwide level. Its what we aim for day by day. Sometimes we don’t notice our improvements because we polish very small details, but it’s when we compete that we notice our overall development.

Where do you set your limits?

We don’t set limits. We are focused on the now, on going step by step, game by game…I’m an Atletico de Madrid fan, if you couldn’t tell. We have new objectives now. Coming up in December we have the Spanish championship in Logroño, where everyone is invited. In January we’ll compete in the European series followed by the World Series in March. We want to beat our previous scores and keep improving our skating.

You mention day by day work as your focus for improvement. Could you take us through a regular training day for you?

We start at 9:30 with ballet or elevation classes. The acrobatic and technical aspects we practice with a personal trainer outside the skating rink. Once we’re done, we have two two-hour training sessions inside the ice-skating rink; one in the morning and one in the afternoon, amounting to a total of 4 hours. We do some extra fitness training twice a week and I also take ballroom dance classes.

Do you define yourself as a perfectionist sportswoman, to the point where it becomes obsessive and you won’t leave the rink until you have done the exercise perfectly?

We are perfectionists, but everyday is different. Sometimes it’s better to stop, give the element you are working on some time to rest, and give our body a break. Sometimes you leave something for two days and when you try it again it just happens effortlessly. Its important to find a balance.

You didn’t mention mental work. Do you not train it?

We work on it individually because we have a partner who we must attend to. Ice skating is based on team work. From time to time I have a colleague that helps me in difficult moments or when I need to handle high expectations and pressure. But we don’t have a professional that follows up on us. We work on the psychological and emotional aspects together. You can always tell your partner your doubts and he will always support you. I see Kirill more often than my parents. We are more than a marriage, because most couples don’t work together. We are a two-person business who improve the end- product.

You live in Moscow now. How have you acclimatised to the city?

Most of the time I’m training. What’s important to me is to be happy during training. I always arrive super motivated. Every day is a new opportunity. I live alone in my apartment. The first few years I lived with one of my ice-skating colleagues. Moscow is a very lively city. There is always something to do. It’s active and fun. It’s not a closed-minded city like it used to be; nowadays you can find people from all over the world. I have met many Spanish people here. The change is not only in the people that surround you but also in the cities’ structure. The streets are brand new. They made a large investment for the FIFA World Cup. It’s amazing to stroll around the city and see how majestic it is. Most weekends I like wandering around its great parks.

Is ice-skating in Russia like football is in Spain?

Totally. Ice skating has always been more well known than football, although now, after the FIFA World Cup, football has become equally as popular if not more, but ice hockey and ice skating are still the King sports here in Russia. It only takes a Russian athlete to slightly stand out for people to start following them. The crowd that usually comes to see us is educated and supports us, regardless of whether we are Russian or not. They just like ice skating.

Do people stop you on the street?

Not yet. People might know me, but I am happy that people don’t recognise me on the street.

Have you experienced Russian discipline in your training?

They are dedicated and committed people. If they do something, they will put all their effort into it. Kirill told me: “If you’re not going to give it your all, don’t bother coming”. It’s a characteristic that is present in every Russian athlete. Sport is their job, their definition of success in life. They are constantly looking for ways to better themselves. In terms of training, I believe discipline always exists in any ice-skating school if you are looking to fight for a medal. The typical Russian is very direct when facing high levels of pressure. They come across as cold people, fighters; they go to war in every competition. But really its because of their commitment.

You live in Moscow and your sport requires many extras. What sort of economic support do you receive?

Economic support is precarious. Even after finishing twelfth in the Olympics, we only got the ADO scholarship. In my case, I used to be in the Podium scholarship program which is better than ADO. I can’t say no to them because if I did, Kirill would lose his part. Ice-skating has many expenses. The sport doesn’t only require a pair of ice-skates. We have to edit music, choreographies, go to ballroom dancing classes, spend hours on ice…We have to rent the rink per hour. In Spain, most private ice rinks prefer to cram 500 people into them rather than have 2 ice skating couples training. We still lose money; the difficulties mainly arise in my agenda. I have to renew my visa every three months and travel to Madrid for four days to do so.

So, it’s a complex situation

My parents are my biggest sponsors. The Federation is in charge of covering the cost of coaches and the ice-skating hours. Choreographers, day to day expenses, visas, flights to Madrid…all of this we have to pay for personally. We would have had to win as much as Usain Bolt for it to cover all of our expenses.

How did you fall in love with this sport?

In the most natural way. I went to the “Nevera de Majadahonda”; the ice-skating rink in my hometown, to celebrate a school friend’s birthday. I tried it, liked it and started doing it as an extra scholar activity. I also used to play the violin, took ballet classes, played tennis…

How has Javier Fernandez’s rise in media awareness helped you?

We haven’t felt any big changes, but it has made an impact at a cultural level. People are more aware of the sport now. It has ended the ignorance towards it that has always existed. Now, if you ask somebody in Spain about ice-skating, they talk about that Spanish guy that skates very well. I think this is more important than any economic support because it impregnates the culture of our sport.

Ice-skating has jumped to the widescreen in movies such as “I, Tonya”. Those were different times but, how is the competitivity between athletes nowadays?

They were different times and it used to happen in countries with brutal competition. You must overcome regional, sectorial, provincial and other competitions. Making it to the national team is incredibly hard. Back in the days that tension may have existed, but nowadays we understand that it doesn’t depend on us but on the judges. There isn’t much we can do about their decision, we are all friends and get to know each other pretty well. It is not as intense as it used to be.

Barcelona has been working with the Pyrenees to present a candidature to host the Winter Olympic Games. Will this have an impact on your sport?

Bringing live sports to any country is the best way to break the common trends and introduce new ones such as winter sports, which are still unknown here in Spain. Our winter sports are mainly focused on leisure. There are spectacular ski slopes and they are constantly full. It’s a shame that it hasn’t translated to the world of competition yet.

What do you combine your sport with?

I’m still studying Advertising and Public Relations at UCAM. I started Journalism and Media in Vitoria, but it meant I had to be present in class and it was impossible to combine it with ice skating, considering I live in Moscow. UCAM gives me the option to take the course online. I want to continue being sports active, but I’m not set on anything yet. I like the world of art, dance and body expression…